Fortnite is the most popular action game, now available on the App Store. Epic Games company surprised the public by its announcement of the release of the full-fledged mobile version of Fortnite - Battle Royale. You are the only hero able to save the world from devastation, but don't forget about the storm that destroyed almost the entire population. No time to be bored.

This game requires an iPhone 6S/SE , iPad as well as Android devices. On older devices such as the iPhone 5S, Fortnite will also run, but will most likely crash on intro screensavers or directly from the game menu. Today, to enter the game, you need to get an invitation from the developer. Anyone can apply on the game's website.

The Plot of The Game

The plot of the game is simple and based on the fact that on planet Earth, due to some mysterious cataclysm, terrible storms begin raging. The sky is covered with purple thunderclouds, lightning flashes. The living dead slowly move toward human cities. These creatures quickly wipe out most of humanity. People remaining alive group up, begin to build fortifications trying to figure out what the hell is happening to their home planet. The player gets a role of one of the survivors and tries to make a tangible contribution to the common cause.

When you press any free space on the screen, a virtual joystick appears on the left for the space moving, and the right part of the display is designed to look around, aim and destroy the enemy. All necessary additional buttons appear basically under the right finger whenever you need it. For example, after moving to Construction mode, there will be the tools for installing the blocks. Squat and jump buttons are located on the right. You can aim with swipes on the right side of the display, and shoot by pressing in the center of the screen.

As for the graphics, for the mobile version of the game, it is more than gorgeous. Lots of colors make this game more realistic, despite the animated performance. To make everything work as it should, the developers suggested automatic graphics setting up which helps to balance resolution and texture quality to make things work in a proper way.

Despite all the cons, this version of Fortnite has all the prerequisites to enter the Top 3 best mobile action games. Much depends on the players' personal preferences. But it's easy to use and very appealing. To assess it more accurately, you need to download the app and try it out. Most players choose this version, so there is something to think about. The game is amazing! Try it on your mobile devices at least once to share the great impression. 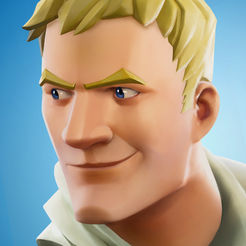 Fortnite
126.6MB
Take a note. This app’s size is bigger than the average in this category